Since the beginning of the pandemic, the Pune-based Serum Institute of India (SII) has taken a lead in vaccine manufacturing in the country. SII is the world’s largest producer of vaccines in terms of volume and is currently responsible for manufacturing Covishield. Covishield is the AstraZeneca and Oxford University developed vaccine for COVID-19. Recently, Adar Poonawalla, the CEO of Serum Institute of India made a startling claim in an interview to a UK newspaper. In the interview, Poonawalla said that he received ‘threats’ from powerful people for delivery of vaccines.

Poonawalla, who is currently in the UK, also hinted at starting a new vaccine production unit there. “Had an excellent meeting with all our partners & stakeholders in the U.K. Meanwhile, pleased to state that COVISHIELD’s production is in full swing in Pune. I look forward to reviewing operations upon my return in a few days,” he tweeted on Saturday.

SII has also been the centre of controversy over the issue of pricing of the vaccine in the country. There is a massive vaccine shortage in India and while the government has made everyone above the age of 18 eligible for vaccination, several Indian states have had to delay commencement of vaccination drive or suspend it temporarily.

Poonawalla’s claim that he had received “aggressive demands” from some “powerful people” of the country for vaccines has turned into a political slugfest between the ruling Maharashtra Vikas Aghadi (MVA) and Opposition Bharatiya Janata Party (BJP). The MVA has asked Poonawalla to disclose the names, while BJP said they have information on who threatened the SII chief, but will disclose the names at an “appropriate” time.

The state BJP also jumped into the controversy, with leader Ashish Shelar claiming that he knew the people threatening Poonawalla. “Various names are cropping up in the case related to the threats to SII’s Adar Poonawalla. If the links are connected to the local party, then it needs to be taken very seriously. We have specific information about it and BJP will expose them. The people who are involved should be ready to face consequences,” warned Shelar. A news channel had claimed that Shiv Sena workers were threatening Poonawalla for vaccines. Industries minister Subhash Desai wrote a strong-worded letter to the channel, objecting to it defaming the party. The channel anchor expressed regret later, calling it “mixing of identities”. But Sena has demanded an apology on prime time show over the allegation.

The name of farmer leader Raju Shetti has also cropped up in this matter. Shetti has warned that he would not allow vaccine trucks to leave the state till Maharashtra gets its “rightful share” of the doses. “I have never called Poonawalla and had warned central government that I will not allow discrimination to Maharashtra. The state has the highest number of Covid-19 cases and the [SII’s Covishield] vaccine is produced here. Hence, we are entitled for a larger quota,” said Shetti.

Meanwhile, NCP slammed Poonawalla over the vaccine prices. “He [Poonawalla] sold vaccines at ₹150 per dose to the Centre and at ₹400 per dose for the states. When people started questioning him, he reduced the price by ₹100. All this has created suspicion [over profit making] about him. No one is trying to defame him,” NCP’s chief spokesperson Nawab Malik said.

The Covishield Vs. Covaxin Debate

The vaccine row erupted after Adar Poonawalla, in an interview on Sunday, said that only three vaccines passed all the scientific evaluations — Pfizer-BioNTech, Modera and Oxford-AstraZeneca — and that while the others were safe, “safe like water”, their effectiveness had not yet been evaluated. After questions were raised by experts on emergency approval granted to the indigenous Covaxin, Bharat Bharat Biotech chairman Krishna Ella on Monday said, “We do 200 per cent honest clinical trials and yet we receive backlash. If I am wrong, tell me. Some companies have branded me like water.” He, however, did not name Serum Institute CEO Adar Poonawalla.

The second wave of the pandemic has left the country reeling with the shortage of oxygen, ventilators, hospital beds and medical staff. In the middle of all this, while the centre did announce the third phase of vaccination and made people aged between 18-44 years eligible to get the vaccine, it is a reality that this announcement was made under pressure. The central government made the announcement when the country had already started to crumble under the pressure of new cases and how it handed the pricing and distribution entirely to the producers of these vaccines is also scratchy.

In the middle of all this, when the head of the largest vaccine producing company in the world says that he was being pressured by powerful people for vaccines, one cannot help but wonder what is going to be the future of the country in the next few months. It is notable the Poonawalla had Y plus security provided by the centre and yet he had to fly to the UK in order to ensure his safety.

Politics of dead bodies has started in the country with the pandemic slated to rake up more dead bodies.

Where is the Indian welfare state and how is the largest democracy in the world? 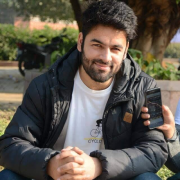 Farzan Bashir is a postgraduate in Law from Kashmir. Though he is qualified for the legal field, it is writing where he finds solace. Currently, you can find him scribbling for Digpu News Network.